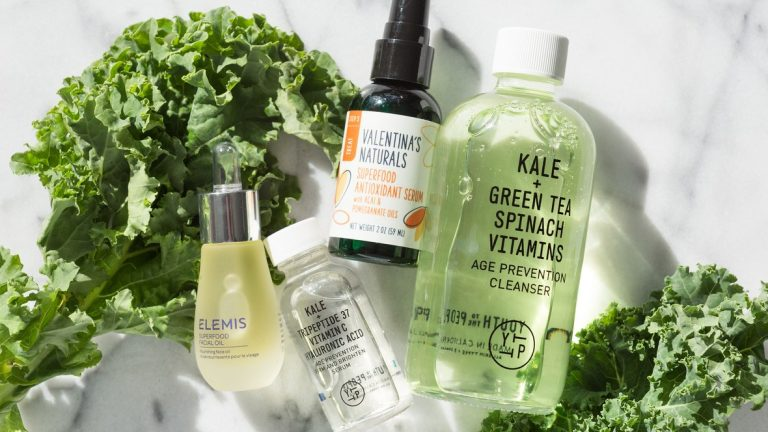 Superfood Skin Care Is Having a Moment

Your obsession with green juice is about to get a lot more complex thanks to a recent crop of superfood skin-care products boasting the good-for-you-ingredients frequently found in your favorite post-workout drink.
Leafy greens, such as kale and spinach, along with açai berries (another smoothie superstar) are popping up in some of the latest creams, serums, and oils this season, with formulas promising to boost skin’s hydration and fight off free radicals.
Newly launched vegan skin-care brand Youth to the People debuted a three-piece collection earlier this year, which features a cleanser, a serum, and a moisturizer made of superfood formulas packed with kale, spinach, and alfalfa as well as hyaluronic acid. And First Aid Beauty, known for its simple, sensitive-skin-safe lineup, is also tapping into the green-machine theme with a line of veggie-inspired products set to launch later this year. (Mark your calendars for December!)
“Both kale and spinach are rich in a variety of potent antioxidants that help reduce skin inflammation,” says Joshua Zeichner, the director of cosmetic and clinical research in dermatology at Mount Sinai Hospital in New York City. “Superfoods provide our body with the building blocks it needs to function optimally, and now their benefits are being delivered directly to the skin topically.”
Elemis also released a broccoli-, cucumber-, and rose-hip-seed-oil-infused facial elixir, aptly named Superfood Facial Oil, which is rich in antioxidants and fatty acids that can plump and soothe dull skin, while Valentina’s Naturals Superfood Antioxidant Serum (made with açai and pomegranate-seed oils) seeps into skin to protect against environmental irritants (smog, smoke, and dirt in the air).